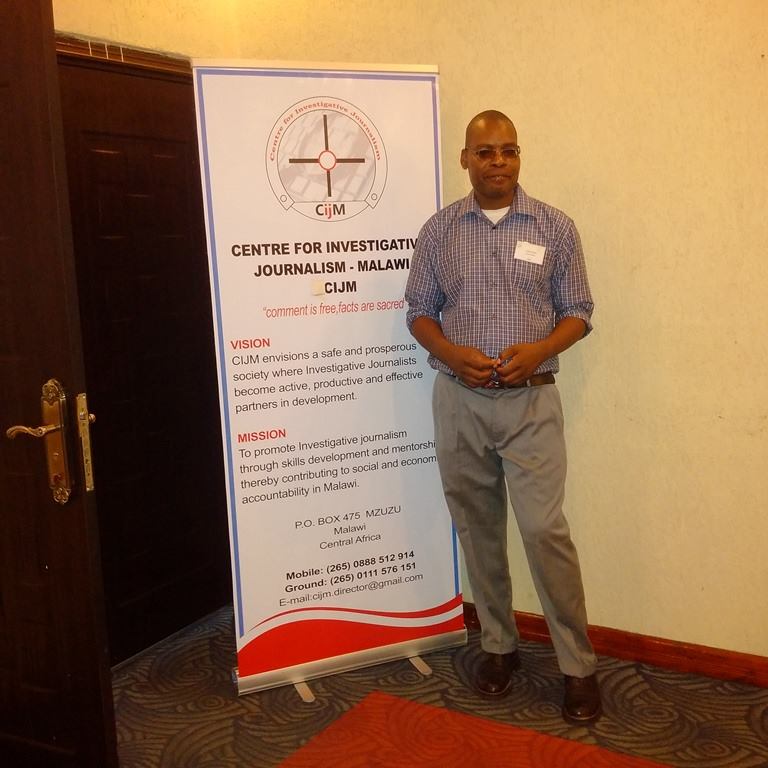 An investigative reporting outlet that also incorporates mentorship and training to connect with regional outlets with similar missions.

The Center for Investigative Journalism Malawi (CIJM) is the only operating non-profit journalism organization in Malawi. Funded in 2015 by a $90,000 Open Societies Initiative in Africa (OSISA) grant, CIJM began both journalist training programs and non-partisan investigative reporting. T

he goal of the organization is to shed light on the activities and motives of public officials, and hold them accountable to their constituency.

Collins Mtika is one of the founders of CIJM, and still actively participates in the day-to-day operations and writing of the center.  A journalist in Malawi of 14 years, Mtika was well positioned to shape an independent journalism outlet.

Malawi’s freedom of press is classified as “partly free” which is comparable to the other countries in southern Africa. The violence against journalists is lower than that in East African countries. However, per Mtika, the media space is limited to the two perspectives of the political parties.

The current ruling party of Malawi, the Democratic Progressive Party, is politically centrist, and apart from a 2 year term of The People’s Party, (a center-right political group), has been in power since 2009. Malawi has two daily newspapers, each with a political orientation, The Nation (pro-government), and The Daily News (anti-government).

As with many African nations, radio is the media with the most comprehensive reach. In Malawi, it is monopolized by the state-owned Malawi Broadcasting Corporation, which greatly skews the majority of information reaching the general population towards pro-government bias. The goal of CIJM was to expose truths beyond the political propaganda of the mainstream media.

CIJM was founded by 9 journalists, 7 of whom are not directly involved with the day to day operations. Two are full time staff and reporters, and all founders are involved and confer at the quarterly meetings to agree on programming and reporting goals. Mtika has a history of muckraking, and his leadership in CIJM promises to continue his drive for transparent journalism.

The mission of the center is to promote investigative journalism through skills development and mentorship programming. This in turn will contribute to the social and economic accountability of the public sector in Malawi and create a safe and prosperous society where journalists can flourish. Mtika sees investigative journalism as the key to changing the corrupt and broken system.

He does not feel hopeful that change is forthcoming; as a journalist in Malawi for 14 years, he does not see a transparent public sector on the horizon. However, there are signs that the media space is improving — Malawi’s Freedom of Press index rose 6 rankings in 2018 (from 70th to 64th out of 180 countries ranked), and a law that allows journalists to request information about public officials went into effect in February of 2017.[1]

Though these signs must be assessed in a context where corruption is pervasive (Transparency International ranks Malawi 122/180, with a corruption score of 31/100 (0 being highly corrupt)), a “D” country risk assessment from Coface[2], and a drop in foreign direct investment of 15% from 2016 to 2017.[3]

The reporting from CITE, averaging 1-3 articles a month based on the website archive, investigate and expose corruption around the major economic drivers in the country: extractive industries, foreign investment, and domestic laws.

From profiles on corrupt individuals, to calling out corporate structures with inequitable power dynamics — the mission of the center is evident in each piece; to increase transparency and hold parties accountable. The pieces are direct — with headlines that include the names of corporations or officials, they aim to draw attention to both the issues and the perpetrators.

The stories do have tangible impact as well, a series of stories about the former president Joyce Banda taking money from oil companies resulted in a local investigation in 2017.

While this created national attention around the matter, Banda was already living outside of Malawi after her political defeat in the 2014 election. She refused to return to Malawi to face charges, and the case was later settled.

While this is an example of coverage with direct impact, it is impossible to gauge how much that has limited corruption as a whole. It also likely drives the negative perceptions towards investigative journalism that many politicians hold.

The public response and risks the center faces match with the political hostility towards investigative journalism. As the primary audience of their pieces are entities in the public sector, many politicians may see the center’s work as a personal attack.

The goal of CIJM publications is to be used for advocacy, litigation, or other actionable policy change. The center offices were raided in early 2018, but nothing was stolen. Mtika foresees similar intimidation to occur in the future as well, ranging from potential personal attacks to legal risks.

To date, the center has existed due to donor funding. No consistent revenue streams are established in the center’s programming. The center does not sell subscriptions or advertising, nor does the website have a donation options. Finding ways to monetize their endeavors is the next step for CIJM, and while Mtika is aware these components are necessary to run a sustainable business, he did not provide a plan for obtaining them.

Currently, the primary means of distribution is through Facebook, which has just over 2,000 followers.[4] The CIJM website is not optimized for distribution, nor does it have any advertising space, but is the primary place of publishing.

Given the limited means of distribution, based on Malawi’s population of 19 million people, the scale of impact is relatively small, particularly of the local population. Many Facebook followers are abroad, and therefore it feels like the impact of the organization is split between local journalist and global understanding.

According to Mtika, should the center be able to make 30% of their costs via revenue, he would consider the organization successful, if they are able to cover all fixed costs (without salaries), he would consider it financial sustainable. Therefore, even in a best case scenario, this organization will likely need to rely on donor funding for existence.

However, these initiatives are all ideas, actionable steps are not being taken to include advertising, subscription, or other revenue generating model. Mtika mentioned many times in the interview that they need support for “these types of things,” but do not have the human or financial capacity to organize the center into a revenue generating model.

GIZ has provided funding to send reporters to South Africa, and small grants for investigative reporting from 2016-2018. Hivos provided a 10,000 Euro grant for specific extractives reporting.

And in 2017 the International Center for Journalists provided $10,000 for health reporting. While the primary funding has come from OSISA, Mtika is realistic in his search for other funders. “Donors are not forever,” he says, and laments both the logistical and potential ideological interferences this type of dependency may cause.

CIJM has collaborated regionally with outlets in Botswana and South Africa. They have also expanded the geographic breadth of Malawian investigative reporting, publishing pieces with their South African partner, AmaBhungane and the The Star Newspaper.

However, Mtika himself lamented the minimal capacity for investigative journalism in comparison to the center’s other programming. Due to the need to demonstrate impact to donors, to whom the center is completely beholden to, much of the centers resources go to training and mentorship programs.

These do not directly contribute to the published work of the center, and Mtika mentioned the feeling that the center lost sight of its mission due to the focus on trainings.

The operations of CIJM include 7 full time staff, (4 of which are contributors) and stories are pitched, then commissioned. Part time staff includes 3 freelance writers, and 2 interns.

CIJM has a single office in Mzuzu, Malawi, with additional part time staff working remotely in other cities. The operating costs are variable, depending on the amount of written work commissioned, and if trainings are put on.

However, CIJM has not developed any other revenue models to subsidize the donor funding. They do not sell advertising, or offer an easy online donation option (though wire transfer instructions are listed on the website for donation options).

The Center for Investigative Journalism fits a necessary niche in the limited written media space in Malawi, but currently does not have a sustainable means of existence beyond donor support.