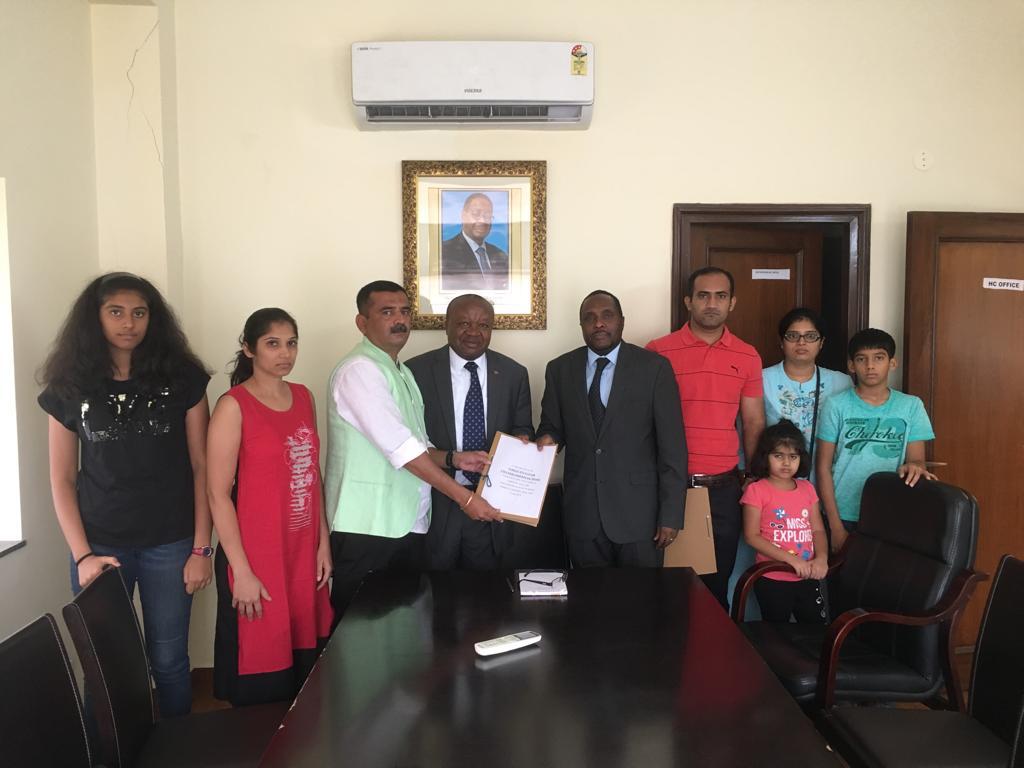 The country’s  High Commission in New Dheli has dismissed claims by Indian businessman Chandrashekar More, whom the Malawi government deported in 2017 for tax evasion, that he held demonsrations at the Embassy and he is filing a public interest  litigation to stop all investments to Malawi.

The department of Immigration and Citizenship services deported More in May 2017 for tax evasion amounting to MK20 million.

But the Indian claims his deportation was disproportionate and that he wants  to stop all investments to Malawi and affect  Malawi in a very bad manner.

He also wants to stop lines of credit to Malawi and halt all import of piegeon peace  from Malawi to India until he is allowed back to the southern African nation and continue to do business.

More circulated photographs of him and his family claiming he has been at Malawi High Commission protesting.

But in an interview with Nyasa Tines, Malawi High Commissioner to India, George Mkondiwa dismissed More’s claims as blatant lies.“ It’s not true that he held demos at this Mission. As you know, he is a Prohibited Non- grata person in Malawi.

He was only allowed in the Embassy because he was to collect cash for a Malawian patient he was keeping in Pune,” Mkondiwa said.“ When he came in waiting room, he took some of these photographs.

When he came up to get the cash, he had with him his entire family and his lawyer. At this time, he produced the dossier and handed it over to me and my Deputy. We accepted the picture for future proof.

Otherwise, all the other pictures were taken without our knowledge,” the diplomat added.

The Malawi High Commissioner said the threats about the Indian government terminating assistance to Malawi because of More’s matter are “misguided and without substance.”Mkondiwa  said: “ The Indian Government had earlier evaluated the case and concluded that it cannot intervene in a private business  matter.”

More evaded K20 million which he owed Malawi Revenue Authority (MRA) and had been jumping bail granted by the Malawian court.

He was also accused of uttering racial slurs to police officers and a Magistrate.The Indian despite owing the public tax collector and breaking the law still wants to be treated in a special way because he has money and can be regarded as an investor.

Legislator Kamlepo Kalua  is on record saying that it is “very surprising” that a Malawian cannot be treated with kids’ gloves for breaking the law and evading tax both locally or even in India, yet Moore wants “special” treatment.

“This is the same person who was shouting racists’ remarks at Malawi Police officers and dragging State House into disrepute,” said Kalua.

A governance lobby group, Forum for National Development (FND) through its director Fyson Chodzi asked government not to let the businessman be treated as above Malawi laws.

“Malawi – being a constitutional democracy- demands that all citizens be equal under the supreme law of the land regardless of race, tribe and creed. We understand Mr More has been shielded by the Indian High Commission in Malawi thereby facilitating his jumping bail. This is an act in contempt of the law of the land. The FND hereby calls on government to see to it that Mr More is brought in to face all charges related to his misdoings,” reads part of the statement.

The lobby group says it is also troubled by the conduct of Moore for insulting police officers during his re-arrest at Lilongwe Magistrate Court.

“We are also concerned with how Mr More reacted to his arrest by using vulgar and demeaning language towards law enforcers. It is not right for him or any other person to call police officers ‘plebeians’ and challenging them that he would be out of police cell within 48 hours owing to his connections.”

Further , FND said it was concerned that the Indian businessman insulted the Magistrate.“ We find such arrogance unacceptable and demeaning to our judicial officers,” FND also adds.

“Such a vile conduct vindicates our fears that Mr More relies on his connections with either people at the Indian High Commission or within Malawi Government to cut corners in his operations.”

The group says it will stay focused on the issue to the end as they want to see justice prevail.Of late indigenous Malawians have been complaining that Malawians of Asian origin and Indian businesses are treated with kid gloves when it comes to trade and tax rules.

FND’s stand therefore comes as a new wave of lobbying for fair trade practices to all Malawians and investors.

Meanwhile,  journalist Collins Mtika  claims More is using a Lilongwe based bogus journalist called Tony Adams and his business partner Patrick Bandawe, to send threatening messages to some Indians and Immigration Officers.When confronted More claimed his account has been hacked.