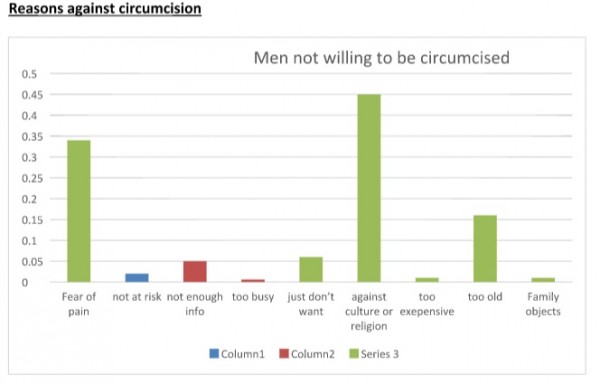 Malawi is grappling with VMMC uptake despite several initiatives

Moses will regret skipping school for the rest of his life. The bright 14 year old was persuaded by his friends to bunk off and sneak into the mysterious camp near to his home in Nkagula, in the south of Malawi.

But the camp, buried deep in the forest, is a no-go zone for teenagers like Moses. Instead, it is where boys from the Yao and Lhomwe tribes undergo initiation rites as they become adults.

Any boy who passes into the restricted area risks falling into the hands of the Angaliba or initiation counsellors. These heavily muscled men, with faces are covered with feathers, perform ritual circumcision on boys in the tribe – and any trespassers, as Moses and his friends found to their cost.

“The Angaliba captured us as we approached the camp and they immediately dragged us inside,” he says. “They forced us to drink a concoction which I believe upset our minds since we all lost interest to go back home.”

Then the boys were brutally circumcised, with the Angaliba using the same blade on each of his victims.

Six months later, Moses fell ill and was taken to hospital where he was diagnosed with HIV.

At first Ndaonga Munthali, the boy’s grandfather, and his mother Mercy refused to believe that Moses had contracted the disease.

“We could still not believe that, so we took him alongside his young sister to a private health centre for another test. Unfortunately only Moses was found with the virus,” says the incredulous Munthali.

“I strongly believe he contracted it at the initiation ceremony as they used one blade on several of them,” he says.

Moses has been given life-saving anti-retroviral therapy but does not always stick to the drug regimen.

Recently, he ended up in hospital after he stopped taking the drugs for five months. “I become very weak when I take the drugs on an empty stomach and feel sick. So I don’t take the drugs when there is no food,” Moses told us during our visit to his home.

Despite his ill health, Moses still hopes to one day become a doctor.

“I feel bad when I see patients suffering in hospital due to shortage of medical workers,” he says, “ I want to become a medical doctor so that I can help treat people of different illnesses.”

Mayeso Makope, an Angaliba at Njara camp in Zomba, admits that the initiation counsellors use the same blade to circumcise two boys but says – wrongly – that this carries no risk of HIV transmission.

“We assume that all those coming for the initiation ceremony have not had sex before hence it is not possible to spread the virus by using one blade,” he said.

The World Health Organization and UNAIDS recommend circumcision as a prevention strategy in countries in sub Saharan Africa where there is a high prevalence of the disease as it reduces the risk of infection by around 60 per cent. Circumcision removes an HIV entry point – the inner foreskin contains cells that HIV targets to enter the body.

The two organisations, however, also recommend that the procedure be carried out by trained health professionals in properly equipped facilities.

Malawi is one of countries hardest hit by the Aids epidemic in Southern Africa, with nearly one in 10 adults being HIV positive.  When the country adopted medical male circumcision as part of its HIV prevention strategy in 2011 there was an overwhelming response. In 2017 alone there were 165 000 circumcisions performed.

In 2016, the United Nations General Assembly set a target of voluntarily circumcising an additional 25 million men in high incidence countries, including Malawi, by 2020.

Matope says once the boys are circumcised, they are moved to another part of the camp where they undergo other initiation rituals such as drinking human blood, and are taught about moral and sexual behaviour.

According to Matope, parents pay 8000 kwacha, about $11, to the Angaliba as a fee for the initiation. Parents then pay another $11 at the end of the ceremony for the child to be released.

But for trespassers such as Moses they have to pay an extra $11 as a penalty. Matopa says sometimes the camp receives up to 60 boys for initiation, adding up to around 990 000 kwacha or about $1320.

However, some believe that the initiation counsellors spread false stories about what happens in the camps to lure boys like Moses and his friends.

“My friends were telling me that there are a lot of extraordinary things happening in the initiation camps,” he says. “They said there are goats with three legs which was very extraordinary to me. I was keen to see those things.”

He had misgivings as he approached the camp but decided to go ahead anyway.

“I was feeling my heart beating uncontrollably, hair and whole body shivering,  It was at this point that I realized I was in the wrong hands but I decided to go ahead because I had almost arrived at the camp,” he said.

Christopher Makunganya, who was initiated in 2017 at the age of 13, describes the ritual as torture.

“The Jando Initiation ceremony is a secret prison for torturing innocent children in the name of moulding them into responsible citizens,” he says. “We were whipped with a bamboo stick on several occasions without any cause; they could tie our legs and hands on beds made of bamboos then circumcise us with one blade.”

The boy claims they were woken up at midnight and thrown in a pool of cold water where they were left for a couple of hours and beaten for every mistake they made.

“The Angaliba used obscene language to talk to us, they forced us to sing songs that sexually insult women, and encouraged us to make experiment by having sex with women once we are released from the camp,” Christopher added.

Matchona Ngwira, a medical male circumcision expert, urges the government to investigate the spread of HIV in initiation ceremonies. There are no official figures on how many boys have caught HIV in this way but there are fears that there may be many cases.

“This is very dangerous for the health of the boys, you can’t use one blade to circumcise more than one person. How do local chiefs allow this to happen in initiation ceremonies being fully aware of the ways of HIV transmission?” he says.

Ngwira says the government should ensure that ritual circumcisions are performed in camps by trained experts.

“The government and other players need to sensitise chiefs and initiation counsellors on the dangers of using one blade to circumcise more than a person.

“We promote medically performed circumcision because it is carried out by trained medical personnel with hygienic equipment in a proper set up, this can also work in initiation ceremonies if the medical personnel would be engaged for this special task,” Ngwira says.

Traditional Senior Chief Malemia of Zomba, a custodian of ancient traditions, agrees with this approach

He says he has told local committees to monitor ceremonies and ensure that counsellors do not use the same blade twice.

With another Jando Initiation season already underway, Senior Chief Malemia, says “I’m already worried that most girls will get early pregnancies and boys contract diseases because they behave recklessly after being initiated.”