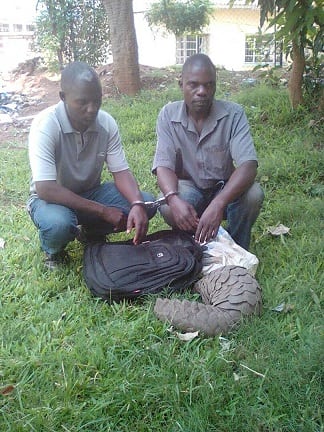 The call only took ten minutes before an agreement was made to meet at a Lodge in Lilongwe, Malawi’s capital city. Pausing as villagers in possession of a pangolin, we offered to sell the animal to our target, a Chinese national whom we had been told is involved in the wildlife black market.

But before the deal was struck, Andy, as we are going to call the Chinese national, abruptly pulled out.

The ‘Lin-Zhang Gang’ is a prolific wildlife trafficking syndicate that has been operating for over a decade. Our investigations reveal that members of the syndicate who are mostly Chinese have been operating in Malawi under the guise of running legal businesses.

The Centre for Investigative Journalism Malawi (CIJM) also found out that the syndicate is also linked to drugs, arms trafficking, and money laundering. It depends on non-suspecting local operatives to smuggle illicit materials out of the country.

In 2016, the Convention on International Trade in Endangered Species of Wild Fauna and Flora (CITES) identified Malawi as a regional hub for wildlife trafficking syndicates. Legislation and governance were weak, enforcement poor, and pervasive levels of corruption were a critical enabler for illicit operations.

Wildlife criminals operate with relative impunity and the largest ivory seizure of all time reported to CITES (7 tonnes seized in 2002) was exported from Malawi.

Mostly sourced from the eastern part of southern Malawi, the Pangolins are usually trafficked by local unsuspecting villagers in either maize sacks or traveling bags. These locals who do not have any direct link to the syndicate members but later pass on the live Pangolin to a local operative who has direct links to the Syndicate.

“I don’t know what you are talking about, I don’t buy or sell any wild animals,” Andy told CIJM over the phone during our last conversation and since after the last discussion his line could not be reached anymore.

A background check on Andy revealed that he had been running a Martial Arts School for almost a year though it had not registered or enrolled any student.

While CIJM’s investigation did establish that Andy is part of the gang, its sources also disclosed in detail how Andy has been regularly traveling to Mangochi and Machinga districts in Southern Malawi which have recently become an epicenter of Pangolins trade.

According to Data  from the Lilongwe Wildlife Trust (LWT), Pangolin related crimes have tripled since 2019 and attributes this to an increase in trafficking despite strong enforcement of the law.

According to a 2021 report titled “The role of Corruption in Enabling Wildlife and Forest Crimes in Malawi” corruption is often perpetrated with support from powerful political figures, and in the context of factors such as weak deterrent legislation and poor law enforcement.

In addition to this, political will has so far been lacking in some sectors in terms of proactive commitment and this report seeks to provide strategies to mitigate existing inter-agency disparity.

According to Amina Daudi Tepani, Mangochi Police Public Relations Officer, most of the people that have been caught with live and dead Pangolins claim that the animals are supplied by their counterparts in Mozambique.

“Most of the people that we have arrested on Pangolin trafficking are Malawians who claim to have sourced the animals from Mozambique,” said Tepani.

Recently the Police in Mangochi district in southern Malawi arrested two Pangolin traffickers   Witness Salikonde, 49 and Rashid White Jusa, 55 for possession dead Pangolins contrary to section 110(b) of National Parks and Wild life Act, the two claimed to be traveling with the animals to a Chinese national in Lilongwe.

When CIJM visited Andy’s school, located in the premises of one popular Lodge in the capital, CIJM learnt that the School had since been closed and the owner had shifted his line of business into agro-business.

However, sources familiar with the school and its owner told CIJM that the School was just a smokescreen for the underground environmental dealings including buying ivory, rhino horns, and precious stones which the owner has been engaged in.

One of CIJM’s sources whom we are just going to call Isiah told us that the Chinese national has been dealing in several environmental products including precious stones and he was very positive that he was also involved in some wildlife dealings.

“The school has been operational since 2018, but it has at no single time enrolled students, raising questions on how the owner manages to pay for the premise’s rentals as well as survive,” the source said.

Malawi has recently been the hub of international wildlife crimes driven by a syndicate of some Chinese and Malawian nationals in the sub-Saharan African region.

According to court records a total of 14 members of the wildlife trafficking syndicate-11 Chinese and 3 Malawians have, since 2019, been sent to Malawian Prisons on different wildlife and environmental crimes including ivory, rhino horn trafficking.

Chinese influence in Malawi has attracted criminals who have penetrated into the country and engaging in different forms of environmental crimes. While recent media reports point to a rise in wild life crimes including Pangolin, Ivory and Timber trafficking involving Malawian citizens and Chinese nationals to China.

Lu Chang, Spokesperson of the Chinese Embassy in Malawi said China condemns linking the misconduct of individual Chinese nationals in Africa to China as a country.

“Wildlife crimes are common in Africa. China believes that ‘killing animals for cash’ and ‘killing for fun’ are equally environmental crimes, animals such as lions, elephants, and other animal species are being hunted across Africa,” Chang said.

According to available data, illegal wildlife trade is one of the most profitable criminal enterprises with the United Nations estimates that globally the trade is worth between $7 billion and $23 billion a year.

Despite this commitment to protecting Africa’s wildlife, China has been portrayed by the media as a catalyst to the souring wildlife crimes.

While there has been a 44 percent decline in wildlife species around the world in the past four decades as a result of poaching and illegal wildlife trade, the paper observes that Africa which is most abundant in wildlife continues to face a decrease in wildlife species and calls for shared responsibility to safeguard the continent’s wildlife.

“All countries and international organizations engaged in exchanges and cooperation with African countries should, from the perspective of safeguarding Africa’s sound natural environment and sustainable development, earnestly shoulder their responsibilities and fulfill their obligations by strengthening international cooperation on African wildlife conservation,” reads part of the report.

Our investigations also indicate that the situation has been made worse by corrupt elements within the law enforcement agencies who have been aiding the criminals to externalize wildlife products like ivory, rhino horn, pangolin scales, and in extreme cases live pangolins to China and other countries.

According data from the Malawi Police and the Department of Parks and Wildlife, there has been a rise in Pangolin trafficking cases as compared to Ivory and Rhino Horn trafficking crimes.

Of the 212 wildlife crimes registered between August 2017 and July 2021, 32 were in relation to Pangolin trade.

While there has been a downward trend in Ivory and Rhino Horn trafficking, the arrest of a Gambian national Sainy Jagne by Thai customs authorities in March 2017 exposed the extensive links enjoyed by wildlife gangs and environmental criminals.

Jagne was caught with 422 pieces of ivory weighing 330 kilograms valued at U$480,000.00. The 330 kg of elephant ivory was seized in Bangkok in March 2017 and seven accused persons have since been arrested concerning this seizure.

While our investigation indicates that Malawi is attractive to wildlife criminals because it has always been considered a low-risk location for the gangs, Brighton Kumchedwa, Director of the Department of Parks and Wildlife, says this is no longer the case.

Kumchedwa blamed the presence of foreign nationals from the far east especially the Chinese whom he claimed eat pangolins, use it for medicine, manufacture perfume from its scales etc, for ‘artificially’ creating the local demand for Pangolins.

Kumchedwa said the amendment of the country’s wildlife legislation in 2017 and change in strategy in the investigation of wildlife crimes has strengthened Malawi’s position in the fight against wildlife crimes.

From 2010-15, the average sentence for wildlife crime offences was a fine of USD $40 and only two custodial sentences had been given. The custodial conviction rate now stands at 90%, averaging at 4.5 years, while privately prosecuted cases have resulted in convictions of up to 18 years, with no option of a fine.

He described the trafficking of pangolins as an emerging regional challenge paradoxically also shifting the blamed to criminal gangs whom he claims were using Malawi as a conduit.

“Following the change of strategy in investigations of wildlife crimes, Malawi is no longer a hub for environmental gangs, however, we don’t want to just create a shift we want to decisively deal with wildlife crime through corroborations with other players in the region,” Kumchedwa said.

The result of this shift in strategy according to Police and Court records has been successful with a conviction rate of around 90 percent of people arrested for wildlife crimes since 2017.

According to, James Kadadzera Spokesperson of the Malawi Police Service, the Police have also heightened their efforts in cracking wildlife crime and they are closely working with the Department of Parks and Wildlife in the effort.

Mary Rice Executive Director of London-based Environmental Investigation Agency the crackdown on nine members of the Ling-Zang syndicate following countless obstacles is a demonstration of Malawi’s political will and determination to fight wildlife crimes.

“Fighting crime on this scale demands sophistication corroboration courage and tenacity. Malawi should be immensely proud and other African countries battling the scourge of illegal wildlife trade would do well to follow this example of global leadership,’’ Rice said in a statement.               T

This is part of a series on environmental crime in Africa, supported by the Global Initiative Against Transnational Organized Crime, the Henry Nxumalo Foundation and Oxpeckers Investigative Environmental Journalism.