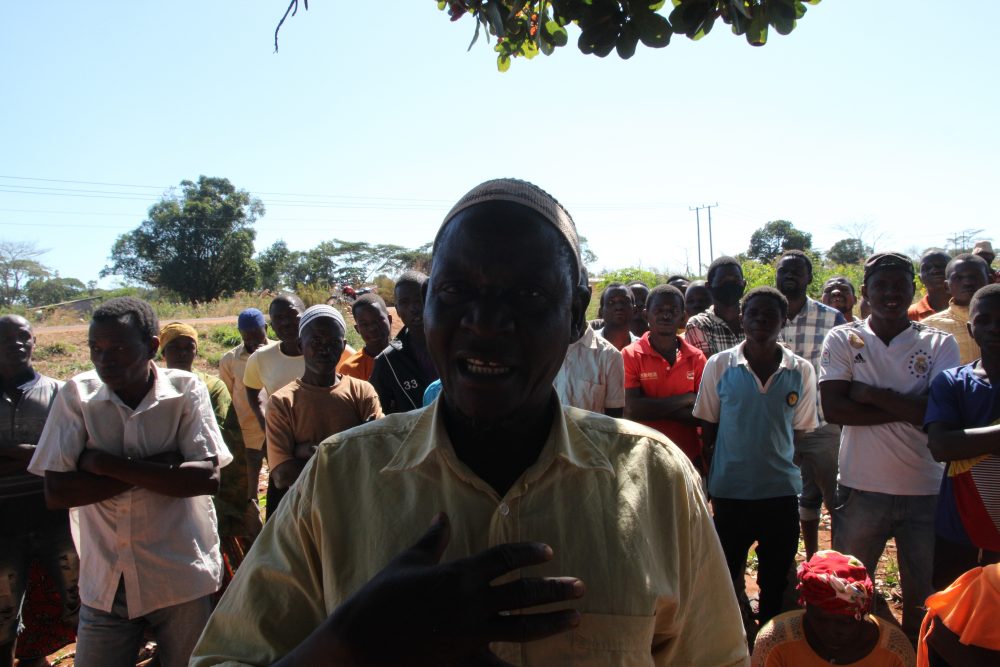 Pemba–Joaquina (real name withheld for security reasons) has suffered serious shocks in quick succession in the aftermath of raids in her village in Macomia district in northern Mozambique’s strife-torn province of Cabo Delgado in December 2020.

The 50 year-old woman was among thousands of villagers who fled the district when insurgents attacked the village in which she was born and grew up.

Now holed up at a safe centre in Muaja in the district of Ancuabe where she is living as an internally displaced person, Joaquina—already a great grandmother for having married as a teen—is struggling to come to terms with the trauma of being suddenly uprooted from the area she had lived in for half a century.

She opened up on her life during an investigation by the Centre for Investigative Journalism (Mozambique), working in collaboration with Information for Development Trust (IDT), a Zimbabwean non-profit organisation supporting journalists to probe corruption and bad governance.

Memories of seeing relatives and friends being decapitated with machetes and shot at point-blank range, sounds of guns in a war she does not understand, the echoing shrieks of children being assaulted by the insurgents, beating awkward escapes through thick forests and mangroves and houses on fire haunt her daily.

She frequently wakes up in the middle of the night, screaming after a nightmare. She then sits up and weeps for hours, and the tears still flowed freely during an interview with this reporter.

Joaquina may be relatively safe in Muaja now, but, in addition to the nightmares and trauma, she has to battle with a new challenge—hunger.

While she was able to grow adequate food for her family before the raid in Macomia, she and the dependants that she managed to bring to the refugee centre, comprising several children, grandchildren and t grandchildren, are now almost exclusively dependent on food donated by donors, the World Food Programme (WFP) among them.

But the aid does not always come when its needed because the humanitarian community is overwhelmed with having to feed almost a million internally displaced persons (IDPs).

And when the food packages come, Joaquina and scores of other IDPs who were interviewed reported, relief workers sell some of it to them or demand sex in exchange for food.

Investigations revealed that, in addition to field officers tasked to distribute food, the syndicates also included local community leaders and chiefs—some of who were named—as well as ruling FRELIMO party officials and village secretaries.

A June 2021 report by the United Nations Office for Humanitarian Affiars (UNOCHA) noted that attacks by insurgents now commonly known as Al-Shabaab or Ahlu Sunnah Wal-Jamaa had displaced 732,000 people in Cabo Delgado—a poor province in northern Mozambique—by April, jumping from 172,000 a year before. (https://reports.unocha.org/en/country/mozambique/card/qXCEhl8yNX/).

On 24 March 2021, the militants killed scores of people—with some being beheaded—in the town of Palma, which is home to a now dormant multi-billion dollar gas project run by French oil giant, Total.

The attack, according to UNOCHA, forced about 68,000 people to flee their homes.

While this group still has a murky identity, it is believed that it has links to the Harakat al-Shabaab al-Mujahedeen that operates in Somalia and Kenya and could also be associated with the terrorist Islamic State.

Observed UNOCHA in its report on the effects of the Al-Shabaab insurgency that started on 5 October 2017 through attacks on police checkpoints in Mocimboa: “Repeated displacement and the consequent destruction of livelihoods are exhausting families’ already scarce resources, increasing the adoption of negative coping mechanisms”.

The humanitarian group says “more than 900,000 people (in affected areas) are severely food-insecure and displaced people and host communities are also in urgent need of shelter, protection and other services.”

He discovered that underground food aid trade by relief workers was particularly rife in Ancuabe and Pemba while sex-for-food was also evident in other areas.

Back in Macomia and before the Al Shabaab militants forced them out, Joaquina’s family took food for granted, harvesting fish from the sea and producing crops in the fields. That is no longer possible and, once in a while, she sneaks out of the safe camp to do odd jobs for nearby households where she is paid modest money in the local meticais.

When she gets the money, she said, she hides it in a safe place because she knows that, when the relief workers come to Muaja in Ancuabe, they mostly ask her, like the other hundreds of IDPs, to part with 1,500 meticais (MT), the equivalent of US$23.50, for a 25kg bag of rice, 25 kg flour and 5 litres of cooking oil.

Failure to give them the money often means that the relief workers will not give them the packages, and they have largely remained silent because, in Joaquina’s words, “We are suffering a lot (because of the sale of food aid), but we don’t want to fight a new enemy”, referring to the aid workers.

She added tearfully and pensively: “I want to go back to my house. Let this war come to an end”.

According to the WFP, children are particularly affected by the food insecurity, and many suffer from acute malnutrition.

The 1,500MT is by no means small money because it takes the likes of Joaquina weeks to raise through odd jobs, and translates to a fortune for the fraudulent relief workers when hundreds of the IDPs pay on every delivery trip.

Forty-five year old Albertina, another occupant of the Muaja camp that holds some 300 IDPs, fled from Pangala village in Macomia late last year when the place was raided by the insurgents. Together with hundreds other villagers, she trekked through thick forests, first to the Meluco district and finally wound up in Muaja. Her pre-teen baby died along the way, apparently because of thirst and hunger.

“In February (2021), they (relief workers) told me I had to pay (for the food). I bought it, and bought it again in April. We questioned, why do we have to purchase the food? We were informed that our names were not on the list of people supposed to receive free food. They said we must wait to be registered before we could receive freed food,” said Albertina.

Even though she has never been to school, she said she recognised the WFP logo on bags of food that were sold to the refugees and the vehicle that has been bringing the aid to her camp. She described the vehicle as a “big car” whose occupants wore orange bibs.

One name that kept pitching up in the testimonies given by the IDPs was that of Domingos, alternatively known as “Rasta”.

Valoi, during the investigations, managed to obtain photographs of Domingos from workers at a non-profit organisation working in Mozambique. All the interviewees in Ancuabe confirmed that the man in the photographs was Rasta, the leader of the aid peddling racket.

A dreadlocked and stocky man, Domingos, they said, often visited the area in his private car and supervised the distribution of the food aid, collecting money from IDPs and barking orders to the WFP field officers.

“Yes, he wears a vest and a T-shirt, he always comes from the organisation (WFP) and sells food. People in the village can’t complain about it because when the Rasta arrives he gets angry at everyone,” said Albertina.

The packages are invariably sold at 1,500 meticais.

Abdul (real identity also concealed), a 70 year old IDP who trekked from Muconjo in Macomia, has been living in the Muaja camp since January.

“I came on my own. Up to today, I do not know the whereabouts of my family. The food here is a problem,” said Abdul.

A few days before the interview, he said, they had protested against the WFP field officers and refused the food they had brought, saying it was too little for the 300 IDPs at the camp.  He could not understand why the officers brought a few bags to them.

Another IDP at Muaja said the field officers were deliberately omitting registering some of them and suspected that was designed to force them to pay for food since they would not be appearing on the list of beneficiaries. There was a separate list of unregistered IDPs who were being forced to pay for the aid.   “They don’t count me as a refugee because I don’t appear on their list,” he said.

Different teams come to the area to distribute the food and those to whom the aid is sold are taken to secluded places in the forest, he added.

Rosario, 38, also identified Domingos as the head of the racket. “I just know they call him Rasta. He is a short man, strong with braided hair and big eyes,” he said. “He comes as a boss. I usually hear that they are distributing money in other places but, here, it doesn’t reach us.”

Another Muaja IDP who spoke anonymously said there were times when they would hear field officers talk to Domingos on the phone for more packages of food aid for resale, with 10 to 50 packs arriving after the communication and being sold by the driver.

In Pemba, investigations led to villagers who alleged that some named community leaders were receiving consignments of the food aid from humanitarian workers and distributing them to local women who offered them sex in return. Women, some of them widowed by the war, had no choice but to offer sex because money was hard to come by.

Because Pemba is also hard hit by hunger, villagers from there sometimes travel to Ancuabe to buy the food packages meant for IDPs and other vulnerable populations, it was established.

Outside Muaja, other areas where the illegal sale of food aid was rampant were Sidique, Nacole, Minhaleua and Atija.

In early June, several local chiefs publicly queried why one of them (named) was always involved in food aid distribution in Atija. Domingos, who could not be traced for his own side of the story, unsuccessfully tried to get the chiefs to collect money from villagers in exchange for food aid, according to villagers.

Speaking off the record, a WFP employee in Pemba said the organisation had already instituted investigations into the unsanctioned sale of food aid and sexual abuse.

The WFP spokesperson, Denise Colletta, however, insisted that her organisation would not be drawn to comment on specific cases, which included the involvement of Domingos.

She said the UN outfit had stringent mechanisms to control and monitor aid distribution.

“Nothing should stop vital humanitarian assistance from reaching those most in need. WFP’s efforts are focused on our beneficiaries and we take any allegations of wrongdoing seriously.

“WFP checks beneficiary lists and ensures staff are on site when assistance is distributed, including for monitoring purposes. WFP also facilitates publicly available reporting mechanisms and telephone hotlines so that anyone can safely report allegations of wrongdoing,” wrote Colletta.

Judging by Colletta’s written statement, it is likely that WFP could have already commenced internal investigations into the aid abuse.

“When our monitoring detects the illegal sale or diversion of humanitarian assistance or the WFP receives reports of wrongdoing, the WFP analyses the reports and considers the appropriate actions to be taken in accordance with its regulatory framework.

“This may include internal investigations and contacting the appropriate authorities. For reasons including confidentiality, the WFP does not comment on specific allegations,” she said.

She did not specifically respond to allegations of sexual abuse.