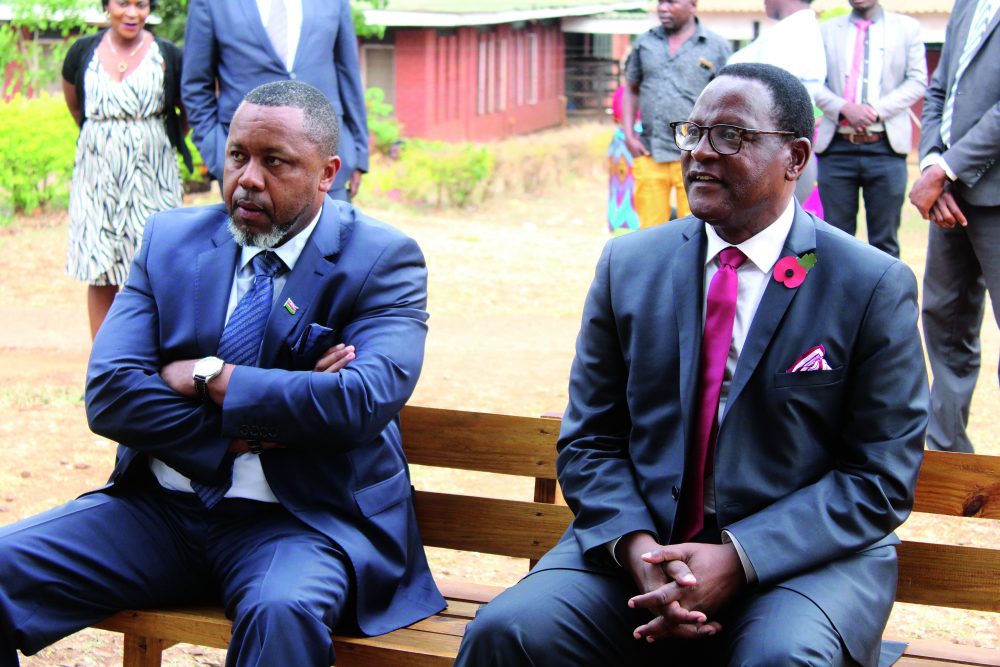 Chilima and Chakwera outside the court picture by Emmanuel Simpokolwe

On 6 July 2020, Lazarus Chakwera was inaugurated as Malawi’s sixth president after winning the 2020 Malawi election, an election that was extraordinary because it was the first on the continent held as a result of a court overturning an election result. Moreover, the incumbent was defeated and stepped down.

Chakwera and his running mate, Saulos Chilima, achieved more together than they had individually in the previous election when they stood as independent candidates, validating their decision to run on the same ticket.

Interestingly, both Chakwera and former President Arthur Mutharika of the Democratic Progress Party (DPP) formed alliances with other parties. Chakwera’s alliance with Chilima was supported by most other opposition parties and was called the Tonse Alliance, while Mutharika formed an alliance with Atupele Muluzi (United Democratic Front).

Understanding the genesis of the coalition may prove beneficial to opposition parties and pro-democracy activists, as the lessons could strengthen and deepen democracy and good governance on the continent.

There are several important lessons from the coalition that proved advantageous to the Tonse Alliance. To obtain a better understanding of the Tonse Alliance and strides made, we review the events that took place between the disputed election of 2019 and the successful 2020 election:

Stronger together – unity for change

Had Chakwera and Chilima formed a coalition for the 2019 elections, they would have garnered more votes than Mutharika. Their decision to run separately paved the way for Mutharika to remain in power longer. While this option may seem simple numerically, it was more difficult in reality, as senior figures within Chakwera’s Malawi Congress Party (MCP) had to be convinced to step aside and free positions for Chilima and his United Transformation Movement (UTM) colleagues. For the re-run 2020 election, Chilima importantly set aside his personal political ambitions for the collective good of removing the DPP from power.

Initially, the MCP and UTM separately challenged the 2019 election result but Lilongwe High Court Judge Charles Mkandawire requested that the respective plaintiffs be joined as parties in the action. Mkandawire indicated that he was satisfied that the two cases were constitutional in nature, and needed Chief Justice Andrew Nyirenda’s certification, in accordance with Section 9(3) of the Courts Act, to have them be heard in the Constitutional Court.

During the Constitutional Court proceedings, a case of political serendipity occurred: a bond between Chakwera and Chilima formed as they shared a bench under a tree during a recess. Photographs of them seemingly cracking jokes went viral in mainstream and social media. This unplanned occurrence may have been the beginning of their alliance journey.

Importance of an impartial and independent electoral management body

The resignation of former Malawi Electoral Commission chairperson Justice Jane Ansah was a pivotal development.The 2020 election might not have taken place had Justice Chifundo Kachale not been appointed as the new MEC chairperson. Kachale brilliantly navigated a combination of political and logistical obstacles, even though he took over only two weeks before the election.

Kachale was able to persuade the government to release funding for the election and to implement measures to prevent earlier widespread irregularities, including the use of correction fluid on ballots. Kachale’s political independence was critical to the elections being deemed credible. His role reinforces the importance of both individual agency and institutional structure.

Malawi was able to hold the 2020 election only because the Constitutional Court  and later the Supreme Court ruled that the 2019 polls had been flawed. In addition, the court ruled that the victor in the presidential elections must win 50% + 1 of the vote, and also set out a timeframe for holding fresh elections.

The court’s overriding of the 2019 election results has set an important legal precedent that should find some footing in courts across the region. This precedent may act as a catalyst to embolden regional pro-democracy activists in other countries to address issues of poor governance and instances of perceived electoral fraud.

Neutrality of the security organs

The refusal of the security organs to be exploited to defy court orders and the popular will of the citizens stands in marked contrast to Zimbabwe’s electoral facades. Mutharika did in fact seek to bring the armed forces into play by firing the head of the military, General Vincent Nundwe, and his deputy, Clement Namangale, and replacing them with more pliable officers. Thankfully, the military has demonstrated a history of defending the rule of law during political transitions, and stood firm on this occasion too.

Minimise potential to rig the outcome

Past elections have demonstrated the benefits of obtaining large winning margins, as some incumbents may be impeded from rigging the result, or cannot rig it by a large margin and maintain credibility. A recent case in point was Belarus’s Aleksandr Lukashenko rigging elections, resulting in an outrageous winning margin of 80.1%. In 2019, Mutharika won 38.57% of the vote, against Chakwera’s 35.41%. However, in 2020, this masterstroke resulted in the coalition securing a winning margin so large (58% – 41% = 17%) that it was all but impossible for the ruling party to rig the outcome.

Malawians took “home-grown ownership” of the 2020 election process, in contrast to past experiences. Although the international community had raised concerns about the country’s ability to hold elections in a free, fair, transparent and credible manner, Malawi proved that it could be achieved even without external observers. Although the disputed 2019 result was seemingly endorsed by foreign electoral observer teams, on this occasion – due to COVID-19 restricting the presence of foreign observers – nothing was left to chance and local observers were called on to endorse the election, holding the government accountable.

The developments in Malawi should inspire pro-democracy activists across the continent. However, replicating the outcome in other contexts may prove challenging if the factors that led to Malawi’s outcome are not properly heeded.

Several countries in the region are preparing to hold elections but are starting from a more compromised position. For instance, in Zambia, the courts have faced criticism for endorsing President Edgar Lungu to run for a second term as president in the 2021 elections. In Tanzania, authorities have stepped up repression of opposition parties, non-governmental organisations and the media ahead of the country’s general elections in October 2020.

In short, there is no formula for opposition parties seeking positive election outcomes. As highlighted above, several factors need to be in place simultaneously. However, if opposition parties had to choose one factor to build their foundation on, from Malawi’s experience, it is the importance of opposition candidates with similar ideologies putting aside their personal ambitions and rivalries in favour of a united stand at the polls.