Malawi Communities gang up for transparency in resource extraction 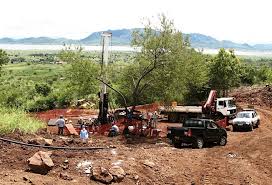 Mining currently contributes less than 10 per cent of Malawi's GDP

People living around mining sites have started mobilising and are demanding contracts from various companies doing resource extraction in their areas for line by line scrutiny to ensure that there is community benefit from these activities.

These formations come amidst increasing reports of continued exploitation of mineral resources allegedly being smuggled out of the country leaving the communities in and around the mining sites short changed.

Mchenga, Jalawe, Khayuti, Mwaulambo, Kayelekera and Kasikizi are some of the areas where communities have ganged up to deal with impunities surrounding the mining activities in their respective areas.

One of the traditional leaders around coal extraction activities at Jalawe Mini Coal Mining in Rumphi District, Francis Muwowo described the situation around mining industries as risky saying if left unchecked it could lead to serious consequences.

“Environmental degradation is taking place at a rapid rate considering the heavy machinery used in the excavation of mineral resources,” Muwowo said.

“We decided to approach the Church and Society Program for proper direction in the way how issues to do extractive industry could be handled without further exploitation,” Mkandawire said.

Church and Society Program’s Manager for the Extractive Sector Paul Mvula applauded the people for coming together as a Community Based Organization (CBO) to push for transparency and accountability.

“We are happy that after we embarked on awareness campaigns we can see some fruits now and we keep on asking why government has taken a lukewarm approach in ensuring that there is sanity in the mining sector,” Mvula said.

Last month the Centre for Investigative Journalism Malawi (CIJM) trained Malawian Journalists on a number of thematic areas which gave the journalists food for thought on government involvement in extractive industry operations which are expected to contribute 20 percent of the country’s domestic product (GDP) by 2020.

Media Trainer and Economist Lowani Mtonga expressed the need for professional reporting on issues to do with mining in Malawi.

Mtonga said the extractive sector in Malawi needs special attention if communities are to be enlightened on their contribution towards the industry.

“Journalists needs to be well conversant with issues to do with this extractive industry, now that Malawi is now a member of the Extractive Industry Transparency Initiative (EITI).

“Malawi’s membership means these natural resources will have to be mined and governed in line with global standards for transparency and accountability,” Mtonga said.

Journalist George Chitaya described the training as an eye opener saying the mentorship programme will help to guide story ideas and planning, research, writing and quality control and publication.

“As journalists we commit ourselves to the highest standards of independent journalism so we need to serve the public’s right to know, in line with section 36 of the Malawi’s constitution which guarantees this fundamental right in order to allow citizens to make decisions and judgments about what is in their society,

“This will also help us to exercise our role with great care and responsibility to safeguard public trust in our integrity as we are expected to exercise the highest level of ethical conduct in line with journalistic values globally,” Chitaya said.

Government recently announced plans to establish the Malawi Mining Authority (MMA) through the 2018 Mines and Minerals Act to regulate activities in the mining industry and to champion sectorial investment which among others call for the establishment of the mineral resource committee.

Meanwhile it seems that mining activities in the country are free for all, as government continues flouting the decentralization policy and raping the local government act that recognizes power to the people, as it fails to decentralize the sector and that is a huge concern to the citizenry.