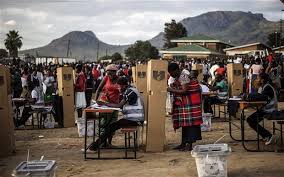 By Gregory Gondwe II for amaBhungane

Dubai-based Al Ghurair Printing and Publishing’s $4.6m (R66m) contract price for printing Malawi’s 21 May election ballot papers was the highest of 13 contenders. They included a South African printer with past Malawian experience that offered to do the job for US$2-million (R29-million) less.

Al Ghurair has previously been at the centre of controversies in Zambia, Kenya and Uganda over contracts to print election materials, revolving around claims of excessive prices and the company’s alleged ties with ruling parties.

In a telephone interview from Dubai, Al Ghurair’s commercial and business development manager, Rajeev Kumar Tyagi, challenged amaBhungane to carry out proper research on his company.

“We have never been controversial,” said Tyagi, who declined to answer further questions. He promised to reply to emailed queries, but had not done so at the time of publication.

At issue is a contract to print about 24-million ballot papers for Malawi’s presidential, parliamentary and local elections, to be held simultaneously on 21 May.

Inspection of the bid prices shows that the Johannesburg-based printer Ren-Form CC tendered $2.68-million (R38.5-million) — about 58% of Al Ghurair’s figure.

Ren-Form’s sales manager, Jean-Pierre du Sart, said his firm has printed materials for close to 80 elections in 22 African countries. It had also successfully produced ballot papers for the last Malawian tripartite poll, in 2014.

It is understood that this is Al Ghurair’s first ballot paper contract in Malawi, although it has printed coupons for a farm input subsidy programme.

Du Sart described the Malawian tender outcome as “suspicious”, saying Ren-Form had written to the electoral commission expressing its “disappointment in the adjudication process”.

In the letter, which amaBhungane has seen, Du Sart complains that Ren-Form received no official notification of the tender award or explanation of why the company’s bid had failed, and only learnt of the outcome through the media.

“Our bid submission complied fully with all technical and delivery requirements. At the tender opening, our pricing was the lowest and in accordance with the specifications,” he said.

“The bid was awarded to a company that was two million dollars more expensive than us. And it is not from the SADC, meaning that the electoral commission will have to pay more in duties and taxes.”

The Malawian Elections Commission had visited the company’s factory to carry out due diligence, he added.

The commission’s chief elections officer, Sam Alfandika, strongly denied any impropriety and insisted that bid prices were not the main deciding factor in awarding tenders.

This echoed a comment by Grace Thipa, spokesperson for the Public Procurement and Disposal of Assets Authority (PPDA), which oversees government procurement in Malawi.

Thipa argued that price is “the last factor to be considered in the bid evaluation process. Bids were first assessed to see if they met tender specifications and legal requirements.”

Alfandika said the commission followed a “very clean” tender process in which Al Ghurair had emerged as the best of 16 bidders.

“It has a good record as one of the best security printing companies in the world.

“The PPDA duly approved the procurement process and the company to print the ballot papers,” he said.

He did not respond to the complaint that the commission failed to inform bidders or explain to them whey they were unsuccessful.

Companies interested in the Malawi contract were asked to supply prices for ballot papers of A3 and A4 size, as well as an average price for both.

The key bids were for A3 papers, which the electoral commission opted for.

In 2016 Lusaka Times reported that opposition parties in Zambia had publicly attacked the Electoral Commission of Zambia for choosing Al Ghurair without conducting proper due diligence.

The parties were quoted as alleging that the company worked closely with the government of President Edgar Lungu and that before the polls, Lungu travelled to Saudi Arabia where he met Al Ghurair officials. His response was not recorded.

The award was also challenged by Ren-Form CC, which had printed ballot papers for Zambian elections in three previous elections.

Thirteen companies vied for the printing contract, with Ren-Form bidding $1.7-million (R24.6-million) and Al Ghurair coming in at $3.6-million (R52.1-million).

The Zambia Procurement Authority overturned the tender, but when it was re-advertised Al Ghurair won it again, with the electoral commission saying that the company met its specifications for security features on the ballots.

To allay suspicions, the commission offered to sponsor an agent from each candidate in the presidential elections to witness the printing of ballots in Dubai.

Al Ghurair’s general manager, Lakshamanan Ganapathy, told Zambian journalists that none of the 12 countries whose ballot papers had been printed by Al Ghurair over the past 10 years had ever raised dissatisfaction about the company’s professionalism or the quality of its ballot papers.

In 2017, there was an outcry from opposition parties after Kenya’s Independent Electoral and Boundaries Commission (IEBC) awarded a ballot-printing contract to Al Ghurair.

The parties alleged that representatives of the Dubai-based company had met President Uhuru Kenyatta at State House, while The Star newspaper reported that during his visit to Dubai in February 2016, Kenyatta was introduced to the Al Ghurair family, owners of the Al Ghurair Group.

In a statement to the Sunday Standard, Al Ghurair said it had no links with any Kenyan political party.

The Court of Appeal of Kenya subsequently ordered that the Dubai-based company should be allowed to fulfil the contract, as it was unable to find evidence of electoral malpractice and the High Court had failed to take into account the short time remaining before the vote.

Rejecting complaints of “exceedingly high” printing costs, the IEBC chief, Ezra Chiloba, said the commission’s duty “is to ensure competitive prices within the market as required by law, which I have no doubt… we have achieved”.

The Supreme Court of Uganda upheld the election outcome, although the nine judges said they had found evidence of electoral malpractice, including the late delivery of polling materials.

In Malawi, the main opposition Malawi Congress Party (MCP) and its election alliance partners, the People’s Party and Freedom Parties, are challenging Al Ghurair’s credentials, claiming that the tender process was insufficiently transparent and noting that there had been concerns over its credibility in Kenya and Zambia.

MCP spokesperson Reverend Maurice Munthali told Nyasa Times that the party and its alliance partners would object to the tender award.

Local media reported the opposition as alleging that the top brass of the ruling Democratic Progressive Party (DPP) was behind the award of the contract to Al Ghurair, and that DPP leaders celebrated after the electoral commission announced its decision.

UDF spokesperson Ken Ndanga objected that his party had not received any information about the procurement, other than the announcement of the tender and contract adjudication.

“We were never part of the team involved in the due diligence process,” said Ndanga.

DPP spokesperson Nicholas Dausi declined to comment, suggesting that amaBhungane should speak to the commission.

The commission told all political parties and candidates in Malawi that if they wished to monitor printing in Dubai, they would have to do so at their own expense and get accreditation from the chief elections officer for access to the printing premises.

On the controversies surrounding the company elsewhere in Africa, Alfandika said he had checked with the relevant electoral bodies.

“They all said those were mere allegations and that the company is credible,” he said.

“Zambia has even printed ballot papers from the same company twice this year (2019) for by-elections.”

The PPDA’s Thipa argued that procurement decisions could not be based on allegations.

“It was the duty of (the electoral commission) to check with electoral bodies in the countries you mention to verify the allegations and inform us accordingly,” she said.

She said Al Ghurair’s documentation showed that it had successfully completed many contracts, including for elections in Ghana, Afghanistan, Libya, Kenya, Zambia, Haiti and the Central African Republic.

Thipa also dismissed objections that the process was secretive, insisting that the most transparent of all procurement methods, the Open Tendering (International Competitive Bidding) procedure, was used.

“Further, the Intention to Award Notice was published before the contract was awarded, making the process open, transparent and fair,” she said.

Asked whether the PPDA recommended Ren-Form for the job, as alleged by one industry source, Thipa said PPDA does not recommend suppliers. “Procurement decisions are made by entities carrying out the procurement, in this case the electoral commission.”

She added: “Once a decision has been made by the procuring entity, PPDA is mandated to review the decision to ensure that the contract is awarded to the rightful bidder based on the legal framework.”

The authority could then issue or withhold a “no objection” ruling and guide the procuring entity accordingly.

Thipa said procurement law mandates the assessment of bidders in three stages — preliminary, technical and financial. Al Ghurair had emerged as the successful bidder from this process.

She was adamant that price is not the first factor to be considered when evaluating bidders, stressing that they must first meet administrative and technical factors before price offers are compared.

She did not specify which administrative, legal or technical factors put Al Ghurair ahead of its rivals.

Section 30 of Malawi’s Public Procurement and Disposal of Public Assets Act stipulates that all public procurements should be conducted in a manner that promotes economy and value for money.

This article was first published by Amabhungane.