Malawi to earn K110bn from graphite mine 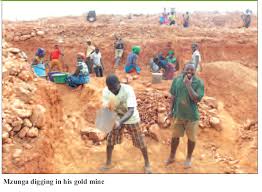 Illegal mining is robbing the country of the much need revenue

Treasury is set to earn $150 million (about K110 billion) tax revenue once mining at Sovereign Metals Limited-owned Malingunde Graphite Mine in Lilongwe starts, a report has indicated.

The draft Environmental Social Impact Assessment (Esia) Report shows that the project will generate revenue in the form of taxes and royalties.

“Estimated tax payable over the life-of-mine is $150 million with an additional $50 million [about K37 billion] in royalties.

“The overall level of revenue generated by the project is anticipated to create a noticeable increase to total government revenues. Increased business activity around the project will also provide increased tax revenue to government,” reads the report in pat.

The company says local workers from the surrounding Malingunde area will be given preference for job opportunities, depending on their skills level, as it is anticipated that available jobs will be largely low-skilled or semi-skilled.

During operation, an estimated 260 people, including expatriates are expected to be employed.

Reacting to the draft report, Ministry of Natural Resources, Energy and Mining spokesperson Sangwani Phiri described the outcome of the report as positive for the country’s economy.

“As of now, the mining sector adds about one percent to gross domestic product [GDP] unlike the time when Kayerekera Uranium Mine was in operation, its contribution to GDP was about 10 percent,” he said.

Geologist Grain Malunga, who is also former minister of Natural Resources, Energy and Mines, said  what has been published in the report is in relation to the taxation laws, the Environmental Management Act and all benefits that accrue to projects of that nature which are prescribed by government.

He said: “If government approves this project and supports it, it will get not less than $200 million [about K148 billion] in direct revenue, but you must also understand that there are issues of procurement. The company will be procuring goods and services which are also subject to withholding tax and value added tax which are not specified in the report.

“There is also pay as you earn from employees and non-residents tax and at the end of the day government will earn more money.”

He said graphite is an industrial mineral and government should not expect revenue as if it is coming from diamond or gold.

Over the 15-year life, the project will the produce 830 000 tonnes of concentrate from processing of 9.5 million tonnes of ore.

The total capital cost for the development of the project is estimated at about $49 million (about K36 billion).

Sovereign Metals Limited is 100 percent owned by Flake Graphite Project and is headquartered in Perth, Australia.

This article first appeared in The Nation Newspaper.