Made in China: China’s Role in Transnational Crime and Illicit Financial Flows 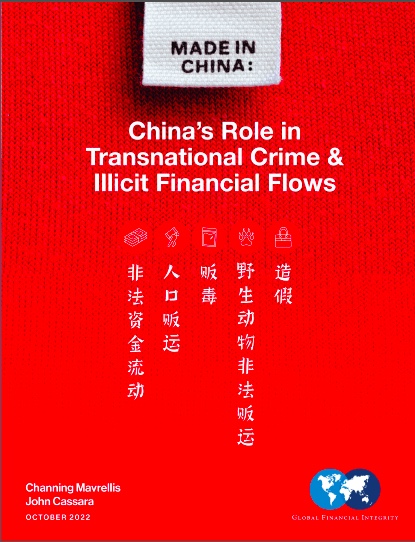 China must improve its response to transnational crimes and IFFs as well as for the U.S. to combat these crimes and flows.

The People’s Republic of China (PRC or China) plays an extremely impactful role as a source, transit and/or demand country in many of the most widespread and serious transnational crimes.

The country is unique in that the government itself engages in certain types of criminal activity—specifically forced labor and intellectual property (IP) rights violations.

In addition, the country’s political, economic, and social policies have extensive repercussions on the presence and prevalence of these crimes, both domestically and internationally. Furthermore, the country’s willingness to cooperate and act on these crimes within the global context has been relatively limited.

Two important factors to consider when evaluating China’s response to transnational crime are its dynamic, and somewhat forceful, pursuit of development and its authoritarianism.

While China has claimed that they have no interest in becoming a global hegemony, there has been no ambiguity about China’s desire to become a geopolitical and economic powerhouse.

The country has invested heavily in social and economic development, at home and abroad, and has crafted policies to aggressively support and protect important issues and sectors.

At times it has sacrificed potential avenues for improving the efficacy of its fight against different transnational crimes in order to avoid any knock-on impacts that may negatively impact its interests.

China is an authoritarian state, and the Chinese Communist Party has significant control over what happens in the country.

While there will obviously be actors, such as criminals, criminal organisations, and the corrupt, that compete against Beijing’s interests, the government has a monopoly over a fair amount of what happens in the country and the agency to quickly, and severely, respond to undesired actors, activities, and flows, especially in comparison to democratic states.

Finally, the paper provides some focused recommendations for China to improve its response to transnational crimes and IFFs as well as for the U.S. to combat these crimes and flows.