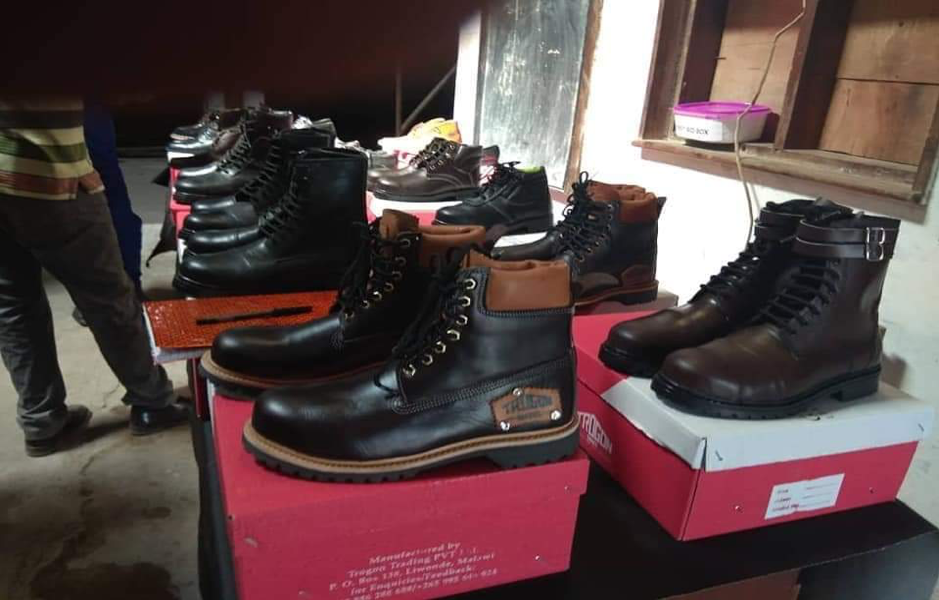 The irony is that, some eight years ago, about 50 of the SMEs were trained through a Chinese initiative on how to boost local shoe production and marketing, a few years after Malawi and China established formal diplomatic relations in 2008.

In 2014, the 50 SMEs drawn from across the country as part of the Malawi Enterprise Productivity Enhancement (MEPE) project that was funded by the Chinese government were trained in shoe manufacturing and commercial management.

By capacitating local SME shoe enterprises, Malawi would save about US$9million in annual import substitution.

The project addressed key productive capacity constraints among SMEs and cooperatives as identified in the National Export Strategy (NES).

It also aimed to support SMEs to scale up local production so as to cut back on shoe imports.

But all that seems to have been grandstanding. There is an influx of Chinese shoes in Malawi and the local shoe industry is gasping for breath.

With a population of around 1.4 billion, China is hungry for markets and is aggressively penetrating all corners of the globe, Malawi included.

The Centre for Investigative Journalism Malawi (CIJM), went out to establish the extent to which the influx of mostly cheap Chinese shoes into the country was affecting small local entities.

Aggrey Dzama (30) is one of Malawi’s young adults who decided to venture into show-making when he was only 20.

Ironically, he was among the beneficiary of Chinese training in shoe trade, but all the knowledge and skills he acquired are going to waste.

Business brought him profits for some time. He grew in fits and starts until, a few years after, he was posting an annual turnover of around US$50,000 through his men’s and women’s shoes business.

In a country whose economy is rated one of the poorest by global standards, that turnover was not a small figure.

His niche market was mainly in and around Lilongwe, the capital, even though, once in a while, he got orders from farther afield from clients who then marked up the price for a marginal profit.

With the money that he got from the shoe business, Dzama was able to buy a residential stand, married and built a modest house.

His plan was to expand the business to other parts of the country by setting up retail outlets and grow his workforce beyond the five employees he had at his peak.

But his dream was, from 2020, dashed by the increasing inflows of cheap shoes from China that forced him to drastically scale down the business.

While a pair of shoes averaged US$20 when he was still doing well and demand was high, a similar order from a trader selling Chinese shoes is pegged at an average of US$5.

Shoes from China are less durable, in the main, but low-income Malawians are flocking to get them ahead of locally made ones because they are relatively more affordable.

The Chinese are trading as shop owners and general merchandisers.

Predictably, Dzama, like many other local shoemakers, is angry at the fact that the Malawian government is doing nothing to protect him from the “unfair” competition from traders peddling the cheap Chinese products.

He also feels cheated that he was given high hopes that his business would boom after the training he received.

“It is up to the Malawi government to thoroughly screen the Chinese nationals willing to invest in the country,” Nyasa Times, quoted the then Chinese ambassador to Malawi in 2018 as saying in reference to proliferation of cheaper, substandard Chinese shoes.

The Malawi government introduced the Business Licensing Act of 2012, which prescribes the types of investments foreigners can engage in, in Malawi.

Foreigners are allowed to operate only in the main cities and have to apply for permits with a deposit of US$ 250,000 as initial capital.

In terms of standards, for instance, the Malawi Bureau of Standards Act was developed with the sole purpose of ensuring that products meet the standards and quality in Malawi.

But “despite having the Act the challenges are lack of appropriate equipment which are meant to test standards of specific imports such as Chinese imports to Malawi,” an official from the Malawi Bureau of Standards told the media at one time.

“Malawians love these cheap Chinese shoes,” bemoans Dzama. “It is now difficult, if not impossible, to convince them to buy from you when they can afford five pairs of cheaper Chinese shoes with the same money they can buy a pair from you.”

Dzama, who is also the chairperson of local Shoe Producers Association (SPA), says almost all the local shoemakers are facing the same difficulties as him.

Investigations established that most of the beneficiaries of the shoe-making training have gone under and are now dormant members of the SPA, with Dzama saying he had lost contact with them.

Eunice Jere, a leather products dealer also based in Lilongwe, says she closed shop because of competition from Chinese products.

“The cost of producing shoes in Malawi is way too high.  We import leather from neighbouring countries such as Tanzania and Zimbabwe and this also impacts a lot on the production cost,” she said.

A few have taken different trading routes to still earn and living.

The situation of the small entrepreneurs contrasts, though, with that of established local shoe companies like Trogon Trading Limited that is located in the Balaka district in central Malawi.

Trogon can still manage to break even because it uses modern equipment and is quite well capitalised.

The company’s managing director, Mohan Suresh Kumar, appealed to the government to support local companies by prioritising procurement of goods and services from Malawian firms.

“For example, we have shoe manufacturing companies but it will be hard for us to grow if government continues to purchase shoes for police officers and other security agencies abroad,” Kumar said.

“Local companies should scale up their production and acquire machinery in line with the fast-changing modern technology. This will be in line with our goals to be exporting more goods. We have potential to compete on the global market and that is the reason government is creating a conducive environment for easy growth of local businesses,” Kachale said.

Easier said than done for the local traders, though, because they do not have access to finance.

Lu Chang, the spokesperson of the Chinese Embassy in Malawi defended Chinese products in Malawi.

“Chinese goods and products are cheap but of good quality. The trade between China and Malawi is mutually beneficial,” said Lu Chang in a Whatsapp response to media questions.C

The Centre for Investigative Journalism Malawi (CIJM) has established that shoes from China are highly subsidized for export, hence sold at a cheaper price than those locally produced.

The situation is exacerbated by the fact that up to 74% of Malawians live on less than $1.25 a day, thereby forcing them to buy cheaper products.

The ministry of Trade and Industry spokesperson, Yamikani Kadzakumanja, evaded the question on whether or not the influx of Chinese products in Malawi was harming local shoe business.

He, however, insisted that Malawi still had the potential to grow the shoe industry.

“Most companies in Malawi do not operate under economies of scale, thereby making access to larger markets difficult and also making their products less competitive,” Kadzakumanja said.

He believes that local entrepreneurs have benefited a lot from the diplomatic relationship between Malawi and China citing training in shoemaking as one of the major benefits.

While, currently, there are no available statistics of annual figures of shoes made by Small and Medium Enterprises (SMEs) in Malawi, the Ministry of Trade and Industry reckons that in 2013, the SME sector was making less than 1000 pairs of shoes annually compared to 100,000 pairs 20 years ago.

It says the local shoe manufacturing sector used to employ more than 300 people about 20 years ago, and now employs about 50 people.

This is linked to the high demand for Chinese shoes.

The Centre for Investigative Journalism Malawi (CIJM) – www.investigative-malawi.org – produced this story with support from Information for Development Trust (IDT) from Zimbabwe.