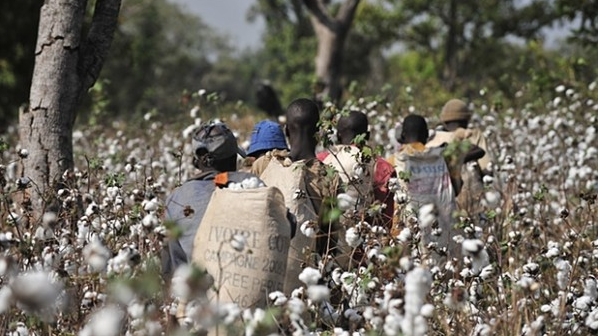 Chancy Chagoma Gondwe from Lupembe in Karonga District in northern Malawi has relied on Cotton as a cash crop for the past five years harvesting an average of 70 bales every growing season.

He ventured into cotton farming expecting to improve his household’s economic status but the continued low prices being offered for the crop have continued to demotivate him.

“Cotton farming is one of the hardest ventures because there are many expenses which are incurred. Unfortunately, the revenue I am realizing because of lack of reliable and competitive markets and better prices does not reflect on the investment I am putting in,” Gondwe said.

Gondwe’s predicament is being shared by many farmers in Karonga District and the rest of the country as far as Cotton farming and production is concerned.

agricultural season the district produced 274 metric tonnes of cotton from 219 hectares down from 600 metric tonnes from 503 hectares record in the 2019/2020 season.

“Production of cotton has dropped by 54% due to price disincentive, farmers demand an average of MK500 per kilogram but the only cotton buyer here ADMARC is buying at a minimum of MK320 per kilogram.

Most farmers here have shifted from Cotton to Sesame production where the new crop is fetching better prices at MK770 per Kilogram this year from MK550 last year,” Mzembe said.

Malawi being an agrarian-based economy has periodically failed to have reliable markets for its smallholder framers despite available trade agreements with one of the biggest consumers of agricultural products, China.

The government entered into trade agreements with Chinese investors to boost its fragile economy in the agricultural sector more especially the cotton industry which has the potential to improve people’s livelihoods.

But Cotton farming is on the verge of ‘extinction’ despite numerous trade opportunities opening up for the crop on the Chinese market.

Apart from the lack of reliable markets and better prices, perennial internal squabbles bordering on lack of transparency and accountability between the Cotton Farmers Association of Malawi (COFAM) and Cotton Council of Malawi (CCM) have for years deterred cotton production and consequently the under usage of the state of the art Chinese funded cotton ginneries dotted around the country.

Malawi produces on average 158,000 metric tonnes of Cotton annually and exports about 32% of the total production, according to the Malawi Investment and Trade Centre.

Despite Malawi highlighting Cotton as a priority export crop in its National Export Strategy because of its potential to generate both foreign exchange and reduce poverty, unfortunately, it’s a troubling crop bedeviled with low prices, lack of competitive markets, and maladministration in organizations margining the sector.

For the past seven years, production has been dismal further dropping by 85 percent.

The state-owned Agriculture Development Marketing Corporation (ADMARC)’s ginneries throughout the country are gathering dust and its Chinese donated machines are depreciating into oblivion because there is little or no cotton coming through.

In 2009 the Malawi government called in Chinese to ramp up Cotton production, thus the China-Africa Cotton Development Ltd registered in Hong Kong and joint-ventured by China-Africa Development Fund, Qingdao Ruichang Cotton Industrial Co., Ltd and Qingdao Huifu Textile Co., Ltd, was born with a plan to invest about US$64.72 million.

However, the conduct of COFAM and CCM has disillusioned many farmers and they are slowly abandoning the crop.

COFAM Vice Chairperson for Lupembe Extension Planning Area in Karonga District Dickens Kang’wale revealed that since 2017 officials from COFAM Secretariat and Cotton Council of Malawi have been deducting MK20 from farmers for every Kilogram of Cotton sold claiming its registration fees for each farmer.

The officials also claimed the money would also be used for the opening of bank accounts in which earnings from their Cotton sales could be deposited but four years down the line nothing has materialized. No single bank account has been opened, Kang’wale said.

Responding to the farmer’s allegations, former COFAM president, George Mnesa admitted that the money collected from farmers never reached the Cotton Council of Malawi Secretariat and he pushed the blame to COFAM vice President, Sarai Nkhonjera.

But Nkhonjera shifted the monetary issue to the late Namwera who was CCM Secretary-General until his death, who led the Karonga team where farmers paid money meant to open bank accounts.

Cotton Farmer Anthony Mwalwanda, who has been growing Cotton for three decades, recalled the days when Cotton buying companies used to go directly to the farmers and compete for their produce.

Mwalwanda is upset that their nearest ginnery at Ngara is not functioning due to the low volumes of Cotton that Farmers have been bringing in for the past years.

“We used to make a lot of profits in the past from cotton, here at Lupembe Section, we have around 450 cotton farmers whose only cash crop is cotton and we are now suffering,” he said.

An agriculture Expert on the cotton sector Tamani Nkhoma Mvula suggested the need for Malawi Cotton to be properly processed considering the potential it has if it is to compete with cotton from other countries and fetch competitive prices.

“The Chinese cotton market is always there to buy cotton from Malawi but first we need to add value and we must export high-quality cotton,” Mvula said.

Despite cotton farming being almost on the verge of ‘extinction’ in the country, the case is very different in neighboring Tanzania and Zambia where other market players from Asian countries like India and China have played a crucial role in revamping cotton farming apart from utilizing the African Continental Free Trade Partnership which was established to propel economic growth through trade for African Union member states.

Lilongwe University of Agriculture and Natural Resources Economist Horace Phiri said that crop prices in the country are volatile such that to sustain the better prices extra work on the market expansion is required.

“Mostly demand and supply takes a toll on the sustainability of production and prices hence need for an aggressive search for external markets, local markets remain limited and rigid to expansion,” Phiri advised.

During the commemoration of this year’s World Cotton Day held on 7th October in Blantyre the Public Relations Officer for the Ministry of Agriculture, Gracian Lungu disclosed that the government has allocated MK2 billion to the cotton industry for research and trials of new seeds that are disease resistant and mature fast.

“We have placed measures to bring irrigation farming into cotton and this will help where rain-fed farming is not doing well and our target is to turn idle farms which were being held for tobacco into cotton farms which we believe will increase production and contribute to the economic growth,” Lungu said.

With the coming in of the China-Africa Cotton Development Limited in Malawi, the government also still hopes the ailing cotton industry may still be revamped.

Malawi’s recognition of China being a significant business partner and an economic force to reckon with in the 21st century was manifested in a keynote address during the People’s Republic of China’s commemoration of its 72nd Foundation Day that was held in September 2021 when Foreign Minister Eisenhower Mkaka expressed admiration to the development trajectory of the PRC that has enabled the country in helping to transform livelihoods for over 100 million people from extreme poverty in developing countries in Sub Sahara and Asian regions.

In a ray of hope, the Cotton Council of Malawi (CCM) through its Special Campaign, Cotton Production Enhancement (Scope) Project reckons that Malawi can produce more than 100,000MT of seed cotton through the creation of a conducive production and marketing environments.

“The critical challenge affecting the cotton sector in the recent years is low seed cotton production since 2011 when production reached 100,000MT after government supported the sector with an input fund, production has been going down up to a level of 6000MT in 2017,” CCM says.