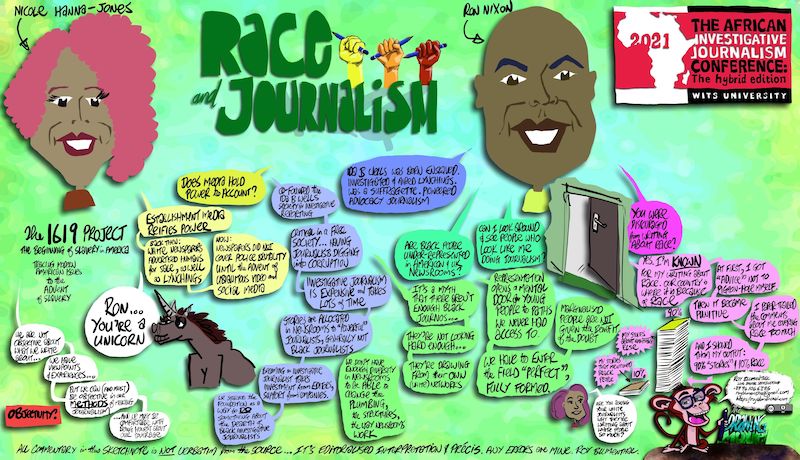 Johannesburg – Levelling the ground for investigative journalists of colour to report the struggles by  minority communities could help to deepen and foster democracy and get people in power to account to the people they claim to serve.

Speaking to delegates to the African Investigative Journalism Conference 2021 in a session titled Race and Journalism, multi-award winning American investigative journalist, Nikole Hannah-Jones,  who spearheaded the 1619 Project, said journalists of colour have for years been treated unfairly leading to stumbling blocks in how they could objectively report on critical issues.

The 1619 Project is a long form-journalism project developed by Hannah-Jones, which “aims to reframe the country’s history by placing the consequences of slavery and the contributions of Black Americans at the very center of the United States‘ national narrative.”

Jones, who has spent her career investigating racial inequality and injustice, said that the media propagates the policies of those in power which leads to the question “who shapes the news?”

Police brutality, disregard for rights of minorities and a general decline in civil liberties have for decades contributed to failure of black journalists to report extensively about the ills in Africa American communities, she asserted.

“It is only after citizen journalism came to the fore that social ills facing minorities like black communities have been exposed. In the past white journalists could rarely report about issues bordering on police brutality and a decline in civil liberties,” she said.

Hannah-Jonnes added that “like most the investigative journalists, journalists of colour have talents and skills. They can be trained in newsrooms and elsewhere but lack opportunities. White employers most of the times employ people they know; people within their networks and most of the times these are males.”

She said black journalists need massive representation in newsrooms to change news discourse about minority communities which, until now, have their issues misrepresented or deliberately misunderstood in the media that is largely dominated by whites.

Several research studies in the United States point to the fact that race issues exist in many newsrooms. In 2020, Clark Merrefield wrote on NiemanLab that whether national outlets or hyper local brands, journalism has a race problem.

Newsroom diversity remains far below the goal the American Society of News Editors set in 1978 “of minority employment by the year 2000 equivalent to the percentage of minority persons within the national population.” Racial and ethnic minorities make up about 40% of the U.S. population, according to Pew Research.

“The thin ranks of people of color in American newsrooms have often meant us-and-them reporting, where everyone from architecture critics to real estate writers, from entertainment reporters to sports anchors, talk about the world as if the people listening or reading their work are exclusively white,” journalist Soledad O’Brien wrote in a New York Times opinion piece published on July 4, 2021.

*Jenipher Changwanda is Malawian journalist working for Radio Malawi Malawi. She is also a news contributor to Gender Links in South Africa and The Lamp magazine and a member of Centre for Collaborative Investigative Journalism (CCIJ) and an AIJC 2021 Fellow.