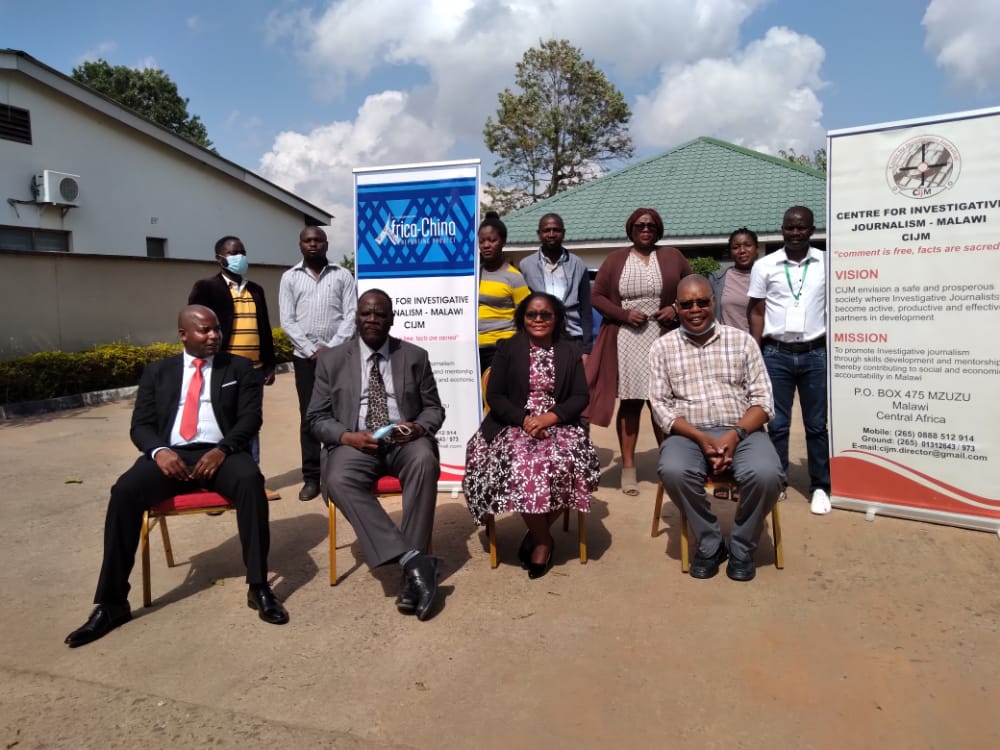 The Centre for Investigative Journalism-Malawi (CIJM) on Wednesday drilled Malawian journalists in investigative journalism skills at Ilala Crest Lodge in the city of Mzuzu.

The training was made possible by the Africa-China Reporting Project (ACRP) hosted at the Journalism Department of the University of Witwatersrand in Johannesburg, South Africa.

The project is aimed at improving the quality of reporting on Africa-China issues by providing facilitation and capacity building for journalists via reporting grants, workshops and other opportunities.

ACRP facilitates journalists to investigate complex dynamics and uncover untold stories, with an emphasis on on-the-ground impact and perspectives to illustrate how the lives of people of Africa are changing amid the comprehensive phenomenon of Africa-China interactions.

During the training, Dr Precious Madula and Mrs Elida Kamanga from Mzuzu University unearthed the relationship between Malawi and China with their challenges as well as opportunities.

It was observed that China has of late become the largest trading partner on the continent of Africa and with its soft power policy which is communism in nature, it is providing loans to African countries with “no strings attached” but it is asking Africans to learn Chinese unlike the West who will keep on checking democratic issues and financial prudence to countries they offer loans.

Magistrate Godfrey Nyirenda from Mzuzu High Court presented on the essential law for journalists focussing on libel and defamation in Malawi before Executive Director for Centre for Investigative Journalism-Malawi (CIJM), Collins Mtika drilled the journalists on pitching guidelines and deliverables.

Speaking to Nyasa Times about the training, Board Chairperson for CIJM, Dan Msowoya, said it was time for journalists to begin to look at issues pragmatically and more specifically.

“There are certain issues that are hidden. This deliberate idea of looking at China-Africa relationships is particularly significant because Africa seems to have turned its attention more to China than anywhere else and therefore that should trigger curiosity among the media to find out why such is the case.

“China was not an ally of Africa for a long time and why now? Will the relationship between China and Africa bring real joy to Africans or just superficial joy?” wondered Msowoya.

CIJM Executive Director, Collins Mtika, said it was time for journalists to embark on developmental journalism where they are able to write feature stories, investigative stories and analytical stories.

“We want to develop a cadre of journalists who can come up with news ideas, explore those ideas, investigate and write feature stories and documentaries about Africa-China relations but focussing on Malawi. The stories may go either way; positive or negative but it is the readers who should judge the relationship and not the journalist themselves,” explained Mtika.

The training drew journalists from Blantyre, Lilongwe and Mzuzu.