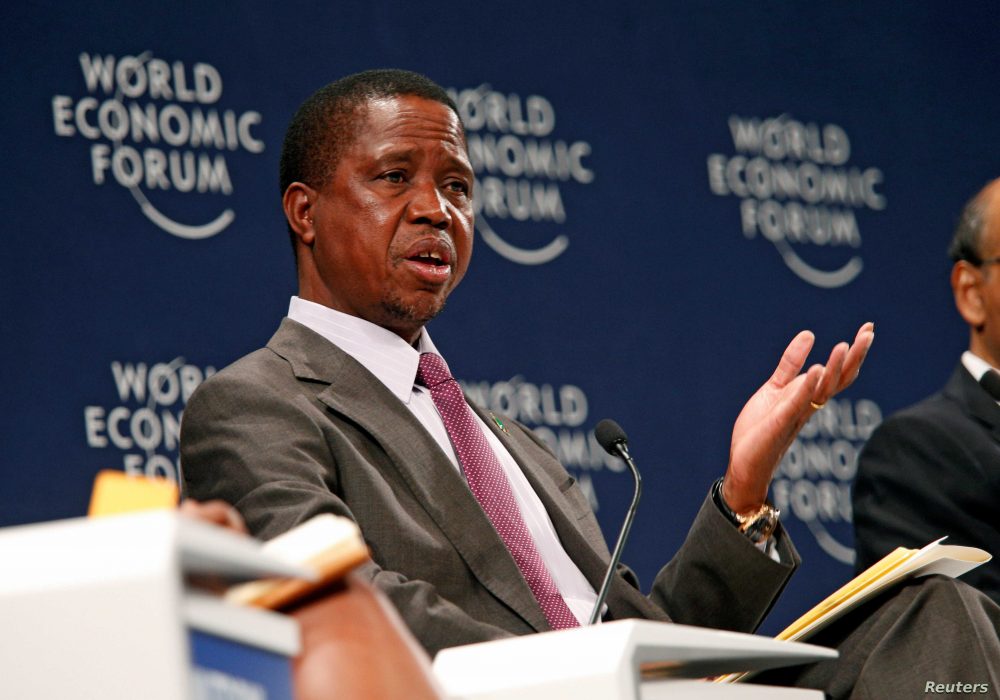 Zambian President Edgar Lungu participates in a discussion at the World Economic Forum on Africa 2017 meeting in Durban, South Africa May 4, 2017. REUTERS/Rogan Ward

There is something to a name after all, it seems.

The late “King Cobra”, Michael Sata, broke away from the Movement for Multi-Party Democracy (MMD) and formed his own party, the Patriotic Front (PF), in 2001, after the former thwarted his bid to stand as its presidential candidate.  The PF is the ruling party in Zambia, now under Edgar Lungu.

Zambia’s ruling party has an uncanny resemblance to its counterpart to the south, the Zimbabwe African National Union (Patriotic Front); Zanu PF in short.

The more famous Zimbabwean party predates its Zambian counterpart by about two decades and the current leader of the latter, Lungu, seems to be a close friend of President Emmerson Mnangagwa, who lived in Zambia for some time during colonial times.

But the commonalities are taking on a worrying layer, with critics of the Zambian party accusing it of increasingly getting more violent as it shrinks democratic space ahead of the 2021 elections set for August.

Jonathan Moyo, a political scientist and former key member of Zanu PF, noted during a recent virtual public debate that all elections in Zimbabwe have been severely contested since 1980 when the country gained majority rule from Britain, and the ruling party has always been accused of unleashing violence, persecuting critics, compressing media space and denying the electorate its fundamental freedoms.

Civil rights groups are worried the situation will worsen ahead of the August elections in Zambia. “We are heading in the same direction as Zimbabwe,” Laura Miti, head of Alliance for Community Action (aca), told the Economist in November last year.

Musa Mwenye, who served as an attorney general between 2011 and 2015, was a bit measured in an interview with Makanday Centre for Investigative Journalism, which worked in collaboration with Information for Development Trust (IDT), a Zimbabwean non-profit organisation helping the media to probe bad governance and corruption.

“I don’t think we will get to the Zimbabwe levels, but there is work to be done,” said Mwenye.

He noted, however, that the Zambian police was getting more heavy-handed in this election period, saying there was more systematic closure of democratic space for the political opposition while media freedom was under threat.

“Those are worrying (signs). I think democracy must be preserved because we were a democracy and a shining example in this part of the world,” added Mwenye.

For O’Brien Kaaba, a law professor at the University of Zambia, “everything is pointing towards further declining of our democracy”.

He added: “Zambia is among the top ten autocratic countries in the world” now, referencing a recent Varieties of Democracy (V-Dem) survey that Makanday reviewed and shows that the country is ranked 111 out of 179 countries, with its southern counterpart, Zimbabwe, standing at 134.

Critics say politically motivated violence against perceived opponents, journalists and civil society is a deliberate election-rigging strategy ahead of August.

But PF party officials have insisted that the accusation is part of a propaganda campaign against them. “We need to be very careful. The way we are using propaganda, we are destroying Zambia,” party deputy secretary general, Mumbi Phiri, told MakanDay.

The decline in democratic standards mostly has its genesis in the formation of PF’s protective private security wing, which began to emerge on the scene as a personal guard for the PF founder, Michael Sata, and other party leaders.

With Sata’s death in 2014, and the arrival of Lungu in January 2015, this PF militia has progressively overshadowed the regular state security services, infiltrating, among others, the police service and assuming the role of the PF’s private army.

Motivated by money, alcohol and other incentives from their political benefactors, these party foot soldiers have become increasingly militant, lawless and violent in their operations.

Political militias are not a new phenomenon. In Zimbabwe, the ruling Zanu PF formed the “Green Bombers” at the turn of the new millennium.

They became a symbol of terror among those that dared to speak out and mobilise against the ruling party, and hundreds of opposition supporters were maimed, killed and persecuted by this militia, which had become law unto itself as Zanu PF faced its stiffest challenge from the Movement for Democratic Change (MDC), formed in late 1999 and to become the biggest challenge to the now late Robert Mugabe, who had ruled Zimbabwe since independence.

The new administration that pushed Mugabe out of power through a military coup in November 2017 is now seeking to revive the “Green Bombers” ahead of the next elections set for 2023.

Violence is begetting more violence in Zambia. In 2016, Lungu appointed a commission to investigate the causes of political violence and emerging divisive voting patterns that characterised the 2016 general elections. The commission established that the level of intolerance between the ruling PF and the opposition UPND had grown exponentially.

“Pre-electoral violence influenced the 2016 voting pattern because the top two political parties, PF and the United Party for National Development (UPND), employed violence in different measures to make it difficult for each other and other parties to campaign in what they termed as their strongholds,” noted the commission.

There has been an upsurge in the persecution of journalists in the run-up to this year’s elections, particularly in PF strongholds.

In May last year, party youths stormed Muchinga FM in Chinsali, some 800 kms north of Lusaka, the capital, and tried to stop a live phone interview with opposition UPND leader, Hakainde Hichilema.

Hichilema was a few days earlier stopped from featuring on another radio station, Mpika FM in Muchinga province. He then tweeted: “I have been blocked from talking to our people in Mpika by the PF through their DC (District Commissioner), Moses Katebe.”

Panji M’soni, the station manager at Muchinga FM, accused the police of trying to “sweep the matter under the carpet” after they failed to act on the reported case of the attack on his station.

“We journalists are not safe to carry out our duties under the PF government because cadres are given too much power and the government is not doing anything to protect us,” M’soni told MakanDay.

There is increasing concern about heavy-handed tactics by the police, which has repeatedly used excessive force to disperse opposition gatherings. Two people were killed in Lusaka late last year when police opened fire on a crowd of opposition supporters.

It was only after pressure from the public that police investigations led to the arrest of one of the officers alleged to have fired the fatal shots.

Kaaba, the University of Zambia law lecturer, described the killings as a testimony of the country’s declining respect for rule-of-law and increasing autocracy in Zambia. He called on Lungu to speak out against the police brutality.

Many groups, international and local human rights organisations, and the Law Association of Zambia (LAZ) condemned the shootings. LAZ urged “the police command to inspire public confidence by ensuring that police officers are not used to aggravate a negatively charged atmosphere as the country draws closer to elections”.

The Council of Catholic Bishops president, George Lungu, called for an inquest to establish who was behind the killings.

Under Lungu, Zambia now has a cyber-security law which gives authorities broad powers of search and seizure that are likely to help the government to further shrink citizens’ democratic space ahead of the August elections.

“You don’t have to be a criminal suspect to be searched,” said a legal expert from the University of Zambia who opted to remain anonymous. “It makes us all suspects.”

He also complained that the law gave unregulated power to monitor, enter premises, search, and audit critical infrastructure without a warrant outside the one to merely get into a property.

Government officials have defended the introduction of the law, saying it is not only about stopping social media abuse, but also detecting real threats to the country’s security.

Former Information and Broadcasting minister, Dora Siliya, said the introduction of the cyber law was in line with what all countries are doing by tightening security to thwart hackers.

Worsening corruption is also generating acute concern in Zambia, whose ratings have steadily declined in the last five years, according to Transparency International (TI) surveys. .

“Where you have lack of accountability and lack of transparency, it basically means that you are not adhering to the principles of good governance,” said Maurice Nyambe, TIZ executive director.

Observers are also worried about Zambia’s shambolic voters’ roll, which the electoral commission scrapped last year and gave the 8 million-strong electorate only 38 days to register afresh in the thick of the rain season.

“Everywhere in the world, you don’t discard a voters’ roll very close to an election, because this is something that requires consultation,” said Mwenye, the ex-attorney general.

Many predicted it was going to be harder to register in opposition strongholds. “Lungu hopes to disenfranchise as many opposition supporters as possible,” argued Sishuwa Sishuwa of the University of Zambia.

The updated roll shows a marked decline in the number of registered voters in Zambia’s western, north-western and southern provinces, all of them considered opposition strongholds. All perceived PF strongholds have broken past records for voter registration as numbers have shot up steeply.